Today brings us the first Saturday NFL games of 2019.  I remember as kid waiting for Saturday NFL because it meant we’d get games on Saturday, Sunday, and then on Monday night as well (back when Monday Night Football was a really big deal).  We only had a few channels back then, so anything sports-related on TV was an instant draw to my brother and me.  Today, I have Direct TV’s NFL Ticket so I can watch every NFL game regardless of market.  And football – college and professional – saturates the airwaves during the fall and early winter.  For people like me, that’s heaven.  For people like my wife, not so much.  There are also half-a-dozen college bowl games on TV today as well.  While those games will draw fans, largely fans of the teams playing, the ratings for the NFL games will dwarf the college games – just like the NFL ratings dwarf just about any competition they meet from other sports to movies to even presidential debates.  At 100 years old the NFL is more popular than ever and nothing on the horizon suggests that will change any time soon.  The New York Times published a great story on the NFL and it’s popularity (and violence) the latter supporting the former.  Read it here. 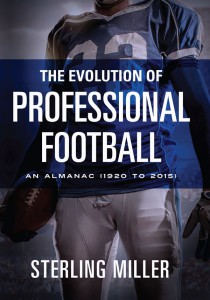