It’s been about one year since “deflategate” roiled the NFL world.  In case you were locked away in a cave for the past 12 months, “deflategate” involved allegations that the New England Patriots and star quarterback, Tom Brady, illegally deflated footballs during last year’s AFC playoffs.  While I have no great love or hate for the Patriots, I did think the $3M investigation and the weak (too be kind) Wells Report and conclusions seemed fishy  – as noted in my book.  It appears they were exactly that.  The New York Times published a story today discussing how a number of noted and independent scientists (MIT, Carnegie Mellon, Univ of Chicago, etc.) found the research and report written by the expert hired by Wells and the NFL would not even meet the quality of a bad graduate student.  The scientists were able to show that the deflation of the footballs was consistent with well known scientific laws around the behavior of gasses in a cold environment.  Click here to read the story.  From the story:

“When he was done, he concluded that Exponent had made a series of basic errors. Leonard’s work showed the exact opposite of Exponent’s conclusions: The drop in the Patriots’ footballs’ p.s.i was consistent with the Ideal Gas Law; the smaller drop in pressure in the Colts’ balls was not. (Leonard surmises that because the Colts’ balls were tested after the Patriots’ balls, they had warmed up again.)

The edited lecture went up on YouTube on Dec. 1 and has been viewed more than 17,000 times. It is utterly convincing. Leonard told me that if an M.I.T. undergraduate made the kinds of mistakes that Exponent made, “I would force them to repeat the experiment and correct the analysis.” Based on his study of the data, Leonard now says: “I am convinced that no deflation occurred and that the Patriots are innocent. It never happened.”

Brady of course ultimately won the battle with the Commissioner over the issue, but the owner of the Patriots paid a steep price for the NFL’s bogus science.  Meaning, the real crime here is the made up crisis put on by Roger Goodell and the NFL front office.  The second crime was not dealing properly with the Patriots’ video-taping incident back in 2007 which led to the other owners wanting Goodell to “get the Patriots” this time around.

And if the Patriots win the Super Bowl again this year… 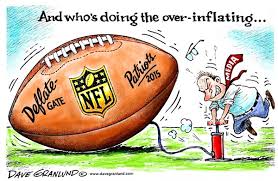